Being obsessed by the desire to understand the Nature of Reality from my early teens. I have read many, many many scientific, spiritual and religious books in an attempt to understand it all. I’ve studied paranormal phenomena, ufos, most branches of science, quantum physics, cosmology, electronics.

I’ve also dived within and explored myself subjectively.

My world view is the result of intuitive feeling and knowings and realisations (subjective evidence) married with Science (objective evidence), other peoples experiences and knowledge as well as great extra dimensional teachers and sources of incredible information. Much how anyones world view arises really. Unlike many people though, I rarely believe what Im told and prefer to explore whether something is true for myself.

This is my world view.

Everything is Living Energy. This energy is conscious.

This consciousness which is and forms all things is a Miracle unto itself.

It does not know how or from where it originates. Yet it finds that it Exists.

It is a Miracle beyond all Miracles.

And BEING, IS the Ultimate Miracle beyond all Miracles.

This Energy/Consciousness/Being-ness is essentially a non “physical” phenomena.

It seeks to know itself.

I seeks to go “beyond” itself.

It can only know itself by reflecting upon itself, in other words by objectifying itself and then looking back at itself.

It does this through EXPERIENCE, and by taking form.

To do this, it creates infinite Worlds/Realities/Environments/Dimensions in which it manifests itself for the reasons above.

It seeks to further itself in all possible ways. It seeks fulfilment.

It flowers out creating and exploring all possible postures of being for the purpose of Experience.

We as Humans are only one particular posture of Being that this Energy has taken.

We are one particular kind of Consciousness that this energy has taken.

A particular configuration of this Energy, to have a particular kind of experience.

The extremely focused Human experience. There exist countless other forms of Consciousness.

This energy can configure itself into infinite postures of being, infinite variations of consciousness, or infinite forms of Being.

It can create a world, then immerse itself in that world, purposefully forgetting that it is the originator of that world, purely to experience the magic and mystery of finding itself in an incredibly beautiful world, not knowing how it came about. Much like us right now!

The energy is like a flower blossoming and fractalling out exploring all postures of Being, all possibilities of Existence, in an infinite play and dance of Being. An infinite song of creativity ever seeking new possibilities, Glories and furthering the Majestic expressions in an attempt to forever go beyond itself. To go beyond what is known within itself, to create and explore new opportunities and probabilities of Being and Existence and further fulfilment.

We as Human Beings, and indeed all things, are Focuses of our larger identity.

The Star represents the Incredibly Vitality, infinite Power and Energy that is Consciousness.

The Energy/Consciousness then sends out these eyes, (its eyes! focuses of attention, portions of itself) out into worlds and dimensions that it has created.

We are those individual eyes. We are a focus of attention of our larger identity. This identity then experiences a reality where it simultaneously experiences all these different points of view in various worlds, within itself for its fulfilment.

Each self/focus sending back information to it, like camera lenses reporting back on its environment. This greater identity then gets to experience all these different points of view.

All these different adventures.

Within us now, our cells do the same, if a group of cells, or larger grouping of cells (an organ) has a problem it will attempt to communicate its problem to you (its larger identity) (through say pain) in the hope that you notice its messages and respond accordingly to ease its dis-ease.

We do the same, and our larger identity does indeed respond to our cries.

When we  open ourselves up to the larger dimensions of Life, then we expand our range of possibilities into new areas, yet unexplored by the Human Species. The way to connect to the larger Energy of our greater identity is through silencing the biological and mental organism, and paying attention to the breath, and focusing on it. This, through reasons currently unknown allows the energetic connection to strengthen and form between you and your greater identity. Allowing you to receive knowledge, insights, inspiration, and incredible life giving Energy and Vitality. The Energy is indeed profound and immense. I speak from direct experience with it. In my experiences with it, I felt as if, I received but a pin width ray of its Energy, yet within that pin width Ray, I could not take anymore, because within, it such immense unspeakable Glorious Energy filled with INCREDIBLE Vitality, that were I to receive more, I felt I could not physically take it, and might… explode!

Meditation is the way we can consciously begin to connect to our greater identity (“Higher Self”) and recieve powerful energy much in the same way that we give energy to the cells within our body.

We consume food, and we send energy to our cells unconsciously.

The Entity, or our greater identity does it consciously.

And we will learn how to consciously connect with our greater identity to recieve all we need.

When you fill yourself up with its Glorious mana… you need nothing more..

LIFE WITHIN LIFE, WORLDS WITHIN WORLDS

Our greater identity, does the same, it sends energy down to us constantly, we can however connect directly to it CONSCIOUSLY through Meditation.

For it to then form a direct link with us and even communicate with us. We can then receive energy from it in greater quantities.

Our cells are limited to a particular range of experience within the Universe that is our physical body.

We however, dwell within a larger universe, a larger living body… and our range of experience is far vaster than that of our cells.

A greater identity then of which we are a part must exist in a reality of even greater freedoms and possibilities. possibilities that we cannot even conceive of, much in the way that our cells probably cannot conceive of our personal reality, where we drive giant vehicles and watch Television, and use computers connecting you to other large beings around the world.

You think of yourself as an individual, but what countless small living cells/beings uphold you?

This Living Energy creates Worlds of such complexity and Beauty. Our World is but one such venture.

There is life at all levels of our World, were one to disappear, the whole system would collapse.

Should bee’s disappear we would cease to exist because nothing would pollinate the plant life allowing it to reproduce.

Should Ants disappear  we would cease to exist because nothing would manage the surface of the planet allowing life to flourish there.

Should the bacteria in soil disappear we would cease to exist because nothing would process and produce the nutrients that the plants need to grow.

There is no higher or lower in Life. There are merely different points of view, or different Postures of Being and experience.

In an infinite play of creativity and expression.

The Energy seeks all possibility.

Each minute level supports and makes possible the larger dimensions of Being.

Small living cells form and support our Being. We in turn are focuses and a part of greater larger life, in an larger ecosystem of Life.

How can we be so arrogant to think that the pinnacle of the compounding of Life ends in a little itty bitty Human Being.

It doesn’t, our Being in ways currently unknown to us go on to form the Reality of other Worlds we are yet to learn of.

Imagine the shock if our cells knew of the reality that they actually formed, could they even be capable of such a thing!?

Let us explore the further reaches of ourselves.

Look at this image of nerve cells within the Brain and a Map of the Universe and its Galactic Clusters. 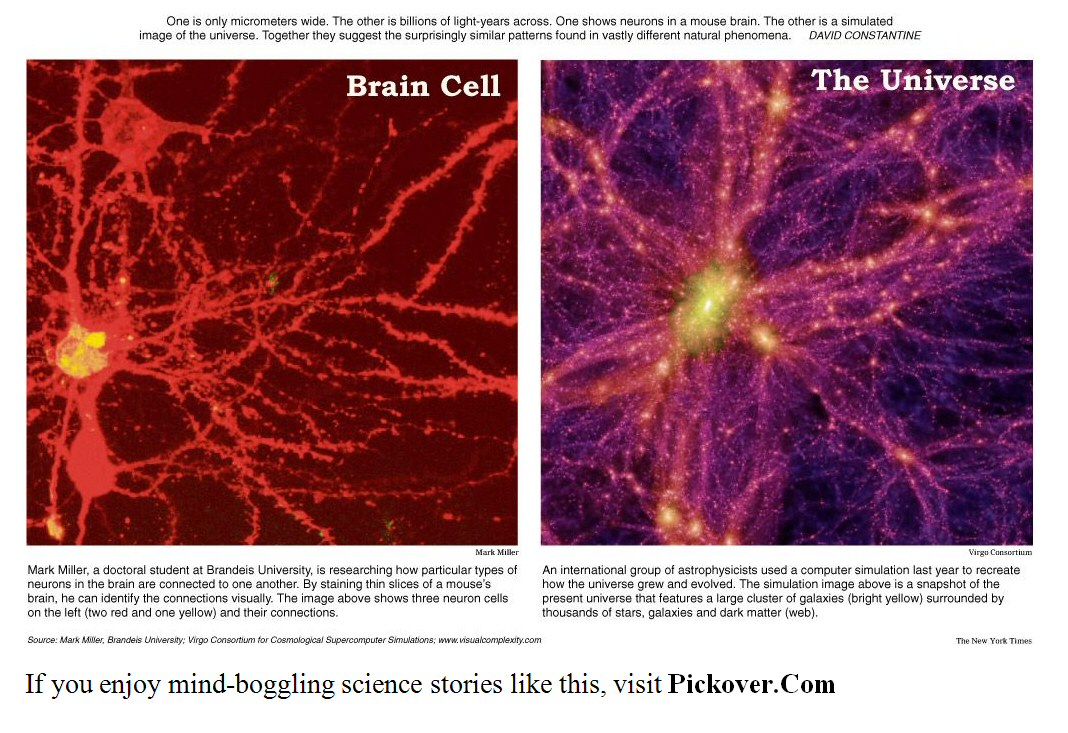 If every Human Being is like a cell within a larger body. Then the Internet acts like Neurons within our body.

Worlds within Worlds, Life within Life.

It is the perfect example of the compounding of life, ever expanding into larger dimensions of activity and experience.

Look at the image of the known map of the Universe, the same pattern occurs at the larger dimensions of Life.

The Internet is literally rapidly evolving the species in ways even yet unknown to us now.

We are learning from each other in ways impossible a few decades ago.

The Internet cables are pulsing with information in the same way our nerves pulse with messages and information within the World of our body.

Life within Life, Worlds within Worlds. Universes within Universes.

The potentials of the Future of Humanity are unspeakably Glorious.

And the internet is facilitating this incredible future we are co-creating together.

Let us facilitate this evolution and paradigm shift by joining together and co-operatively explore the Miracle of our Existence here on Earth, and in unknown dimensions of which we will grow in awareness of, as we expand our senses and connections to our greater identity…

No World View is set in stone.

My World View will continue to expand and grow, just as yours does, and as Science does. And so this page will grow as my ideas expand.

Feel free to leave comments on your points of view. 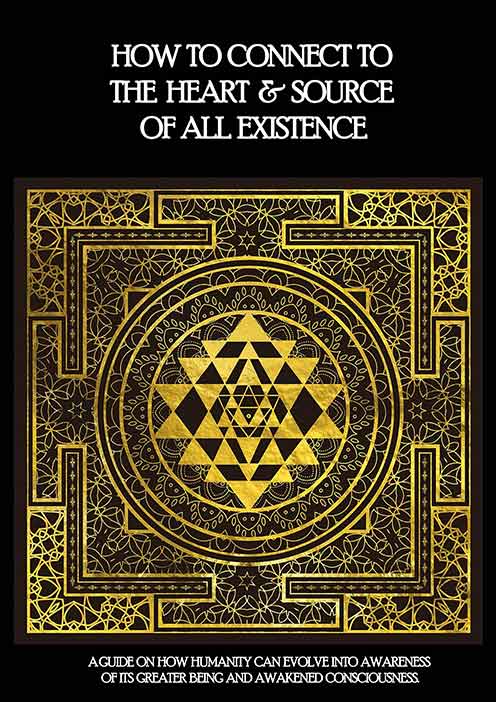